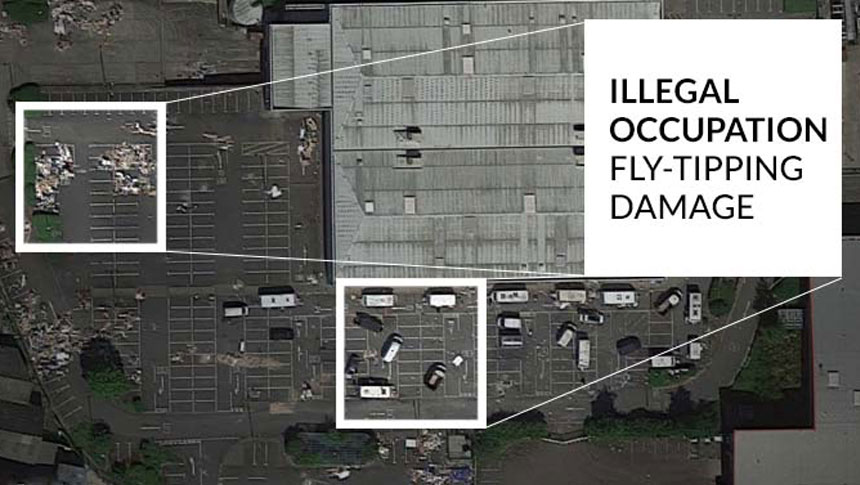 When a retail park-size store closes-down it immediately presents an opportunity for the premises to be illegally occupied and even for the property to be squatted.

Not only does this carry the stress of arranging court enforcement eviction for squatters but also the high cost associated with the damage and mess and health risks left by fly-tipping, vandalism and drug paraphernalia.

This exact situation recently occurred in one of the now-closed Toys ‘R’ Us stores in Croydon, Surrey. The site was quickly occupied by multiple unsightly caravans within days of the closure and the aerial photo shows the extent of waste and fly-tipping whilst they were still there! The subsequent damage to the site and the cost of vacant property clearance could all have been avoided if empty property security measures had been put in place immediately after the site was vacated.

As soon as the illegal occupants were evicted it was imperative to secure the site before a recurrence. Clearway were immediately instructed and began with clearing tons of fly-tipped waste, leaving it clean and tidy for any potential viewings.

We secured the perimeter with multiple concrete barriers; a powerful way of preventing unauthorised vehicle access to the site and preventing further trespassers, fly tippers, vandals and squatters. We also secured the property using steel security sheets and a Clearway keyless Toreadoor which effectively controls access to the property by allowing only authorised personnel in and out using unique codes.

Whilst empty retail units are the sad face of economic difficulties, once cleared and secured, they at least present somewhat less of an eyesore until they can be occupied by new business owners.

Disposing of business waste – what are the rules?