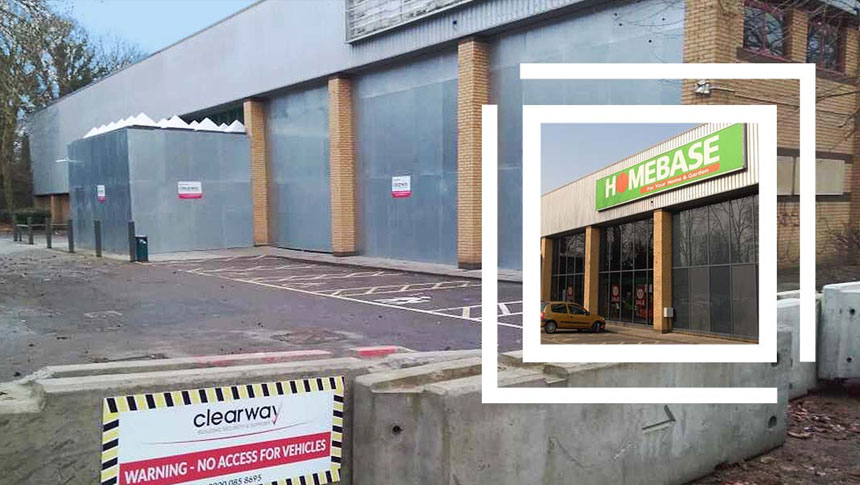 In August 2018, the DIY chain, Homebase, announced it was closing 42 stores across the country by the Spring of 2019 and that a further 70 stores were under on-going review pending negotiations with the stores’ landlords.

Homebase stores are invariably on retail parks and their out-of-town centre sites makes keeping the vacant buildings secure a challenge, given the often deserted locations.

Vacant buildings on this scale are a target for breaking and entering, vandalism and theft, and the car parks act like a magnet for anti-social behaviour and other criminal activity.

As soon as the Canterbury store closed its doors Clearway was called in to secure the entire site as it was deemed to be in a high-risk area where criminal damage and arson had been reported in October 2018. There was particular concern that this empty store would attract squatters or be an easy target for illegal fly-tipping.

Clearway went into action straight away and provided boarding up service. Steel screens were fitted to provide a robust and secure exterior to all windows with steel access doors installed so that estate agents could still carry out viewings for potential new tenants. They also allow access for Clearway’s property inspectors to regularly check the premises both inside and out for any maintenance work needed to stop any deterioration of the building fabric and fittings.

Finally, securing the perimeter of the large car park was paramount to preventing trespassers, squatters and other illegal occupation by vehicles. The solution was to install 33 interconnected concrete barrier blocks around the perimeter with a security access gate to allow authorised entry.

The site remains secure but is, sadly, likely to be only one of many as a further 17 Homebase stores are scheduled to close with 32 still under negotiation.

Disposing of business waste – what are the rules?